So, what is Multiple Myeloma?

We all know about checking for lumps, not smoking, moderating alcohol intake, cutting down on meat and processed foods, and covering up with factor 50.  But would you know the causes, signs or symptoms of Multiple Myeloma? Had you even heard of it?

Multiple Myeloma is considered relatively rare.  It is, but it is also a fact that “blood cancer is the 3rdbiggest cancer killer in the UK, claiming more lives each year than either breast or prostate cancer”1. I want to share my experience so others can hopefully spot it for early diagnosis and treatment, and the best possible outcome. 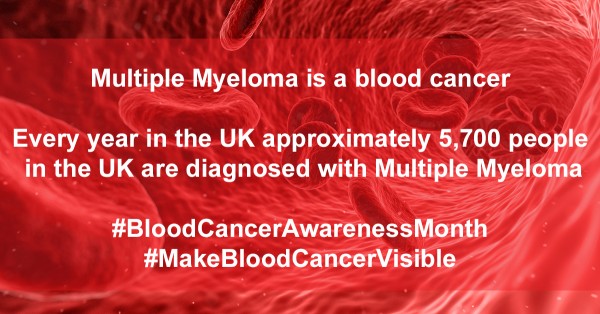 Early on in my MM journey, I preferred to tell people that I had “myeloma” rather having to say the “cancer” word, which tended to get stuck in my throat.  But so few people know what myeloma is that I’m now more likely to say that I have a form of blood cancer, and then say that it’s called myeloma.

What exactly is Multiple Myeloma?

According to Myeloma UK:

Myeloma, also known as multiple myeloma, is a blood cancer arising from plasma cells. At any one time there are around 17,500 people living with myeloma in the UK. It accounts for 15 per cent of blood cancers, and two per cent of all cancers. Myeloma mainly affects those over the age of 65, however it has been diagnosed in people much younger.

Myeloma develops when DNA is damaged during the development of a plasma cell. This abnormal cell then starts to multiply and spread within the bone marrow, releasing large amounts of paraproteins. Unlike many cancers, myeloma does not exist as a lump or tumour. Most of the medical problems related to myeloma are caused by the build-up of abnormal plasma cells in the bone marrow and the presence of the paraprotein in the body.

Myeloma affects multiple places in the body (which is why it is referred to sometimes as ‘multiple’ myeloma) typically the bones of the spine, skull, pelvis, the rib cage, long bones of the arms and legs and the areas around the shoulders and hips.

According to the TEAMM trial run by Warwick Clinical Trials Unit and reported on by Myeloma UK, the most common symptoms before patients first saw a doctor were:

Myeloma UK commented, “the vague nature of the symptoms probably explains why patients can visit a doctor several times before a diagnosis of myeloma is considered”.

“MM” is described as a hidden cancer.  The trouble is that in the early stages, bone damage may cause just mild discomfort or none at all and so are only detectable through CT, PET or MRI scans of the patient’s whole body. Meanwhile, disproportionate amounts of plasma in the blood can continue to multiply long before a referral for a bone marrow biopsy confirms their existence. Added to this, the symptoms which are actually detectable without scans or biopsies, such as tiredness, aches and pains and recurrent infections, can so easily be put down to a busy lifestyle, bad posture whilst working at a desk, overdoing it at the gym, or the fact that it’s winter and so sickness bugs are doing the rounds anyway.

“I went to my GP with pain in my shoulder; after multiple scans it was actually my thigh bone that could snap at any moment and needed immediate pinning. Two major operations and six weeks in hospital followed”.

“Sarah was diagnosed with myeloma following 6 months of unresolved back and chest pain. She had collapsed while in hospital for an x-ray and remained in hospital undiagnosed for some time as doctors struggled to piece together her symptoms”.

“In 2013-14 I went from doctor to doctor to doctor…a 5 day stay in a hospital, trying physical therapy, pain meds, and injections at a pain clinic for about a year. During that year, of not being diagnosed with anything, bones in my back, ribs, and sacrum were fracturing. Finally, in June of 2014, …I was referred for a hip biopsy and I was diagnosed with multiple myeloma.”

Late diagnosis is so common; patients are diagnosed at a later stage with irreparable bone damage, commonly spinal collapse, or kidney failure

But you look so well!

Yes, many myeloma patients look fit and well.  It really can be a very hidden condition.  You can’t see bone damage that’s going on inside. When I was first diagnosed, I’d look in the mirror and wonder how on earth I could look and feel the same as usual, yet I had millions of cancerous cells coursing round my entire body.  Yes I had more back pain, but I’d had no idea that my spine was at imminent risk of collapse.

You can’t see fatigue because on the days that are hard, those affected may rest more or stay at home.  You can’t see “brain fog” caused by treatments and the myeloma itself, although my closer family and friends did notice that I was slower and started forgetting things more. You can’t see insomnia caused by drugs, pain and worry.

Obviously hair loss is a big tell-tale sign, but that’s caused by the chemotherapy, not the cancer itself.

I get it though.  I found out that someone in our village also had myeloma, a total coincidence as it’s an uncommon condition.  My first reaction was surprise as he looked so well.

Please remember that you can’t always tell what’s going on with people on the inside, whether it’s mental health, autism, MS, blood cancer or many other conditions that don’t always manifest themselves explicitly.  And be aware of the signs and symptoms so that you can recognise if something is amiss with your own health that you need to get checked out.

GPs are by definition Generalists

According to Myeloma UK, “despite myeloma being the second most common form of blood cancer, GPs are likely to see only a few cases of myeloma in their career, which can mean it’s not the first thing they suspect when someone comes in to see them”. Also, “Patients with myeloma have often had symptoms for many months before diagnosis and may have seen doctors in general practice or in hospital several times before they are diagnosed”.

What is it not?

The first part of my diagnosis was when I was shown a scan of my spine which showed very clear damage to the T10 vertebra in my spine.  I thought this meant I had bone cancer, and that this was a lump that had formed and needed to be removed somehow.  That wasn’t quite right, as in fact myeloma is a blood cancer found in the bone marrow; it attacks bone tissue and the kidneys, so the damage to my spine was caused by the abnormal presence of paraproteins in my blood. Chemotherapy is intended to supress the myeloma and stop the progress of the bone damage.

I’ve had several experiences of people very kindly sympathising, and also trying to show empathy by telling me that they also know someone who had skin spots or a dodgy mole, but that they were OK now. Skin cancer is generally much better known, and yes melanoma does sound a lot like myeloma.

So it’s technically not bone cancer, and it’s not melanoma either.

When I explain that it’s a type of blood cancer, people will often say “Oh, like leukaemia?” And it is kind of like leukaemia, but it affects a different part of the blood and the symptoms to look out for aren’t all the same.  So yes it’s a blood cancer too, and awareness of leukaemia is much more widespread, so it is natural to liken the two.  But as I’ve found out, our blood is so complex that it’s really not the same at all.  In fact there are several different types of myeloma.

So what causes MM?

No-one is quite sure why certain people become affected by myeloma.  It is agreed that genetic “errors” occur with the DNA of a plasma cell, but the cause isn’t clear.  Risk factors are cited as older age, it is slightly more common in men, and in black populations than in white or Asian.

Environmental factors may increase the risk of developing myeloma, such as exposure to industrial or agricultural chemicals, to high doses of radiation, viruses or a weakened immune system. It’s not passed on through families by an inherited gene, but there is a slightly higher occurrence if there has been a family history of myeloma.

This certainly isn’t a conclusive list though to help guide in terms of who may become a patient; for myself and many other patients I’ve spoken to, none of the above apply.

There is currently no cure.  In most cases it is treatable, although success obviously relies on the body responding well to treatment.  There are more and less aggressive forms, and patients will go through several lines of treatment until ultimately options run out or associated organ damage is beyond repair.

Some well informed consultants and experts in the field of haematology predict that MM will become a chronic condition in the future: something that needs to be managed for life but that will not cause the end of life. More progress is critical though as well as a better understanding for earlier diagnosis.

You can read more about my personal diagnosis journey here.

It’s blood cancer awareness month right now - #makebloodcancervisible .Whether or not better information about blood cancers has already reached you, please like and share my posts and blogs to help raise awareness for everyone you know. Every click counts!! Find me on Twitter @MyelomaRace #MyelomaRace and Facebook: Lorna Myeloma-Race Dunn.